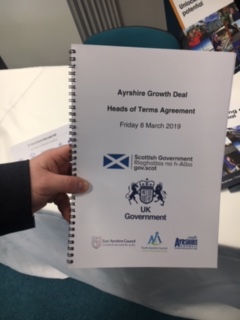 A multi-million pound investment package that will change the face of Ayrshire was rubber-stamped today (Friday 8 March) by the three Ayrshire Councils and the UK and Scottish Government. The £251million Ayrshire Growth Deal was signed and sealed, kick-starting a range of projects across the region. 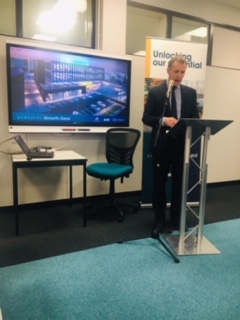 The UK and Scottish Governments will each invest £103 million. This will be supported by South, East and North Ayrshire Councils who will be investing upwards of £45.5m in total.

It is hoped the deal will create approximately 7000 jobs across a wide range of sectors. The investment will be delivered over a 15-year period.

Ayrshire’s three Council leaders were joined by the Secretary of State for Scotland, the Rt Hon David Mundell MP, and Cabinet Secretary for Transport, Infrastructure and Connectivity, Michael Matheson MSP, to sign the Heads of Terms on the deal.

Marie Macklin CBE, Founder and Executive Chair of the HALO Urban Regeneration Company, attended today’s event. She said: “It is truly an exciting time for the whole of Ayrshire. This massive investment in the region will see local people benefit from the thousands of jobs created and the HALO will play a big part in that.

“We welcome the Ayrshire Growth Deal’s support of the HALO Scotland. Construction work is due to begin shortly and everyone at The HALO is looking forward to delivering this exciting, community led development that will breathe new life into not just Kilmarnock and East Ayrshire, but the whole of Scotland.”

“The Scottish Government will invest £103 million as part of a £251.5 million Growth Deal that will drive inclusive growth and benefit people across Ayrshire. Partners estimate this will leverage £300 million of additional investment from the private sector and around 7,000 jobs for the region.

“Scottish Government investment includes £18.5 million for tourism and regeneration, £14.5 million for skills, community wealth building and digital infrastructure and £40 million to develop innovative projects around engineering, manufacturing and digital automation – as well as £30 million for an Aerospace and Space Programme.

“I am delighted that we have reached today’s important milestone in delivering this deal and helping Ayrshire thrive. The successful delivery of the Deal will create new jobs, protect existing ones and extend economic opportunity to communities, families and individuals throughout Ayrshire.

“The Scottish Government has made a financial commitment of £1.7 billion over the next 10 to 20 years for the regions of Ayrshire, Glasgow, Aberdeen, Inverness, Edinburgh, Stirling and the Tay Cities Region, including Deals and additional investment.” 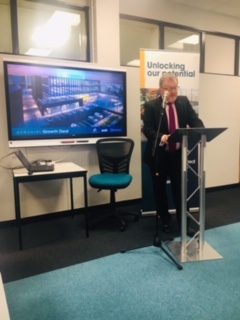 Scottish Secretary, David Mundell said: “It’s fantastic news that the UK Government is to invest more than £100 million to grow Ayrshire’s economy, create jobs and boost prosperity. This investment will transform the Ayrshire economy over the coming 15 years.

“We are investing in a raft of exciting and ambitious projects right across Ayrshire. Initiatives include an aerospace development at Prestwick, a low carbon energy scheme at Hunterston, a local electricity supply project in Cumnock, a manufacturing corridor in Kilmarnock, and a digital subsea cable to dramatically improve connectivity.