It was a special moment for Marie Macklin CBE today as she was presented with a prestigious honour by Glasgow Caledonian University (GCU) at this summer’s graduations.

Marie has been honoured in a week when more than 2,600 students are graduating from Glasgow School for Business and Society, the School of Engineering and Built Environment and the School of Health and Life Sciences. Singer songwriter, social activist and philanthropist Dr Annie Lennox OBE, was also installed this week as the fifth Chancellor of GCU.

Marie, founder and Executive Chair of the HALO Urban Regeneration Company, accepted her Honorary Degree, making her a Doctor of Business Administration, at GCU’s Graduation and Awards ceremony at the Glasgow Royal Concert Hall. 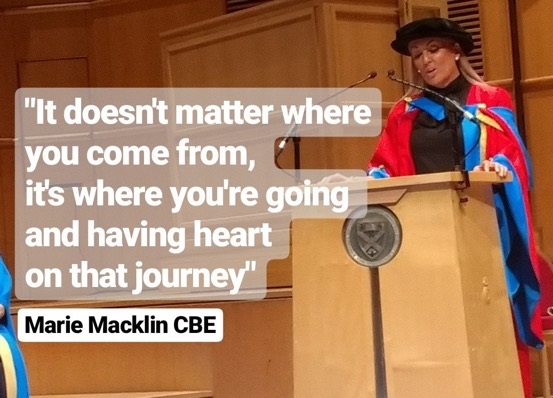 Speaking to the students at today’s ceremony, Marie said: “On the 4th July 1776 the founders of the USA came together and declared a new national revolutionary idea: the belief that they were all created equal, that they were free to govern themselves and that each one of them was entitled to a life of liberty and the pursuit of happiness.

“Today, some 242 years later, each one of you have come together to celebrate your graduation. You have worked hard and faced fear with belief and hope in your heart that this momentous graduation day would become a reality, and it has. You are a huge asset, not just to Scotland but to the world that is now going to hear you sing.

“For you see, many years ago I knew a girl who faced fear, a girl who wanted to sing again, a girl who had a love for music but lacked confidence, was bullied and kept back a year at school with a condition now termed dyslexia, a girl from a challenging post code area where life was tough.

“But her bricklayer father said ‘stay true to yourself, work hard, dare to dream and dare to be different’.

“She watched her community die in the 1970s and 80s during economic decline. But music gave her an escape. She aspired to be educated in a city of greatness – Glasgow- the city of lights, the city built by the hands of men and women of greatness, where entrepreneurs created tomorrow’s world.

“That girl stands here today at her beloved university, GCU, where she has been awarded an Honorary Doctorate for Business for which she is proud and grateful.

“The Declaration of Independence on the 4th July 1776 was a result of the Founding Fathers of the United States. One was a 19-year-old Alexander Hamilton who had huge heart and tenacity. He became the first Secretary of the Treasury and the main author of economic policies of the George Washington administration. He was said to be the Patron Saint of American School of Economic Philosophy.

“He was the illegitimate son of James Hamilton, the fourth son of Laird Alexander Hamilton of Grange, Kilmarnock, Ayrshire –  yes Kilmarnock. The Grange area of Kilmarnock, where that girl aspired to build her home and did. You see it doesn’t matter where you come from, it’s where you’re going that counts and having heart on the journey.

“Today is about letting your heart sing, I want you all to think about heart and how you all can use your heart when making key decisions when leading tomorrow’s world. You are now advancing in a new direction creating a “transformation” based upon diversity, economic growth, innovation and your community values.

“And when I look round this room, I believe the graduates of GCU are going to put our country, Scotland, at the forefront of that tomorrow’s world.”